It's my turn today on the Monster Mash blog tour hosted by Sewing by Ti. This blog tour is all about Halloween costumes or mash-ups of patterns, however you want to interpret "Monster Mash." 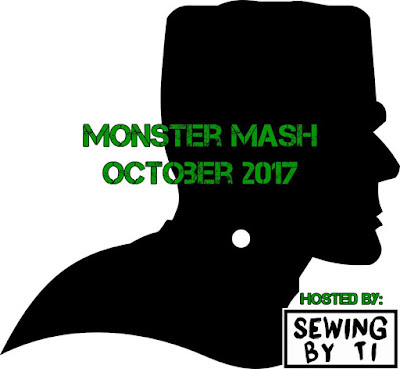 The only problem? I still haven't sewn our Halloween costumes this year.

It's been a crazy busy month, which was true for the last two Octobers as well. The last two years I have not sewn our Halloween costumes, but I really thought I would get around to it this year. Early even. Ha, what was I thinking?

We have had birthdays, school plays, theater class productions, soccer games, an out of town wedding, other family events, even a beloved pet passing away... Not to mention, we love going to the Halloween events at Worlds of Fun, our local theme park. We have gone every weekend in October, sometimes more than once! Kylie has even discovered the fun of haunted houses this year, which are present at Worlds of Fun in October, and it's been a blast taking her. We were worried she wouldn't be old enough to go, but she has really loved them.

So here I am, with Halloween right around the corner and no costumes made. Eve and Kylie, our oldest two, have store bought costumes, but I still need to make costumes for the younger two. Emmett, three years old, wants to be Link from Zelda. Mabel, two years old, is set on being a baby bear. And I have to make them. It's not that those costumes don't exist in the store, it's just that the prices are more than I want to pay.

Since I don't have costumes from this year to show you yet, I will show instead costumes from 2014, which was the last year I made costumes. I have not blogged about these before, so it works out well. I still hope to make a Link and a baby bear costume for this year, so check back after the weekend to see them!

In the meantime, I bring you... Ariel, Belle, and a sumo wrestler. Just three costumes because Mabel wasn't born yet. 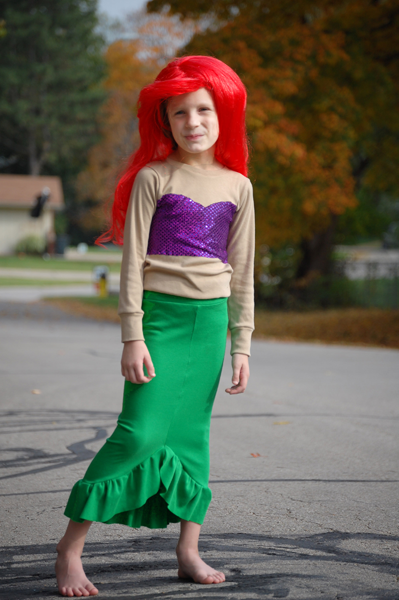 To make the Ariel costume, I used the Alex & Anna PJ pattern from Peek-a-boo Pattern Shop for the top. I used a nude colored interlock and purple sequined dot fabric, both from Joann. I simply cut out the purple fabric in a sweetheart cropped shape and sewed it unto the front piece of the shirt and finished the shirt as normal.

Tip: When sewing the sequin dot fabric, the glue from the sequins can gum up your needle. To prevent this from happening, place wax paper over the fabric/seam while you sew and tear it away when you are done. If you have small pieces of wax paper stuck in the seam, use tweezers to get it out. It will save you a lot of trouble.

For the skirt, I used green interlock from Joann and this tutorial from Girl Inspired. Super Easy!

The red wig was from Amazon, I don't have the link of this exact one. I remember it wasn't too expensive. It held up well for Halloween, but after a few months I was tired of cutting red hairs out of the vacuum cleaner and finding them all over the house so I get rid of it. But the wig was perfect for what we needed it for!

The best thing about blogging about these outfits long after the fact, is the chance to look at pictures I haven't seen in a while.

I found this one and it cracked me up. This was Kylie just acting like the Little Mermaid, I'm sure. She's our child who is in theater, in case you can't tell. 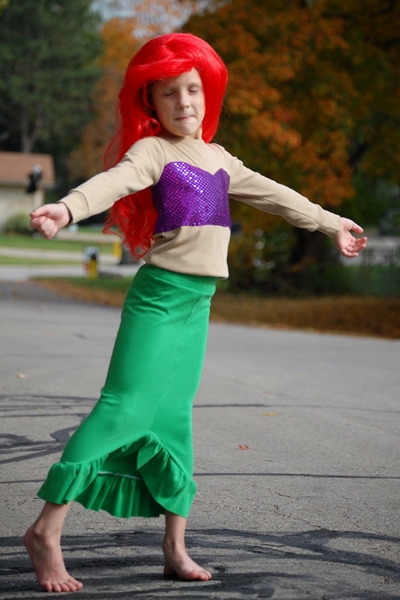 And I found this sequence of pictures. I don't remember this happening, or why I continued to take pictures as Kylie was losing her wig. So funny.

Next up, Eve was Belle, from Beauty and the Beast. 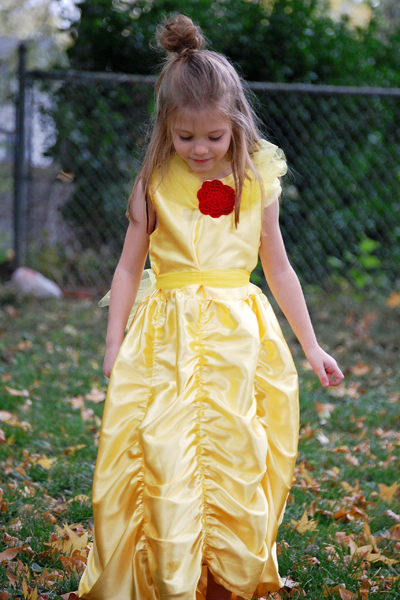 For Eve's costume, I used this free pattern from Peek-a-boo Pattern Shop. It only comes in one size and it fit Eve well at 5 years old, maybe even a little big, but perfect for a costume. She ended up wearing several layers under this dress as it was frigid on Halloween this year.

For sizing reference, she is very petite. She has caught up some in the last few years, but as a kindergartner, she was especially small for her age.

I used cheap satin type fabric, tulle, and a premade flower, all from Joann. I remember this dress going together quickly. I liked how the skirt gathers were sewn with elastic. 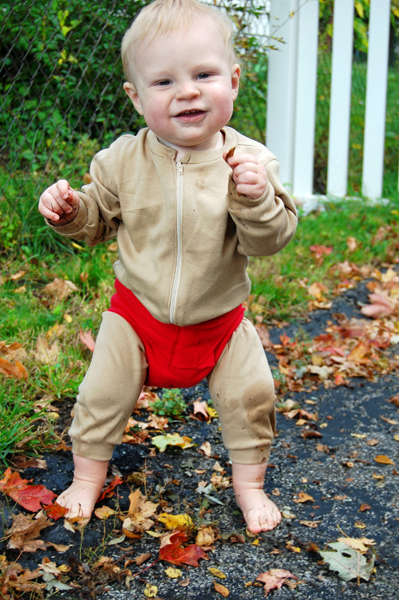 He wore cloth diapers that were solid colored and he had just started toddling around. I thought it would be great if he could wear nothing but one of his red cloth diapers and we could say he was a sumo wrestler and call it a day. But it was too cold for that.

I used the leftover nude colored interlock from Kylie's costume to sew the Classic Footed Pajamas from Peek-a-Boo pattern shop. Then I cut out a red fleece diaper using one of his cloth diapers as a guide. I used velcro on the tabs to keep the "diaper" on him.

Unfortunately, it was way too cold for him to trick or treat this year. We took him to a few houses and then I brought him home while Jason took Kylie and Eve trick or treating some more. They had to wear a lot of layers and their winter coats, and even then they came home early. It was not a great year for trick or treating.

Don't forget to check back in a few days to see if I was able to make Emmett and Mabel their costumes this year!

Thankfully the other bloggers in this blog tour have knocked it out of the park! Go check out what they have made and forget all about my faux pas.

Who is Ma Moose?

Hi, I'm Kristin! My sweet second born, Eve or "Everz" as we call her, started calling me "Ma Moose" when she was four. We don't know where the name came from, but it stuck. Everz likes to remind me when I tuck her in at night that I will be her special Ma Moose forever. It is almost a bittersweet name as I understand that at some point I will no longer have the privilege of tucking in my babies at night. In a sense, I feel that it is representative of my children's childhood and this is my title at this point in their lives.
I started this blog to chronicle my never ending sewing projects, i.e. filling up my children's closets. I didn't become passionate about sewing until I became a mom, or a "Ma Moose." Once I realized the full potential I had to create custom wardrobes just for my kids, I was hooked! Childhood is a special time and I love to create clothing that makes them feel special. 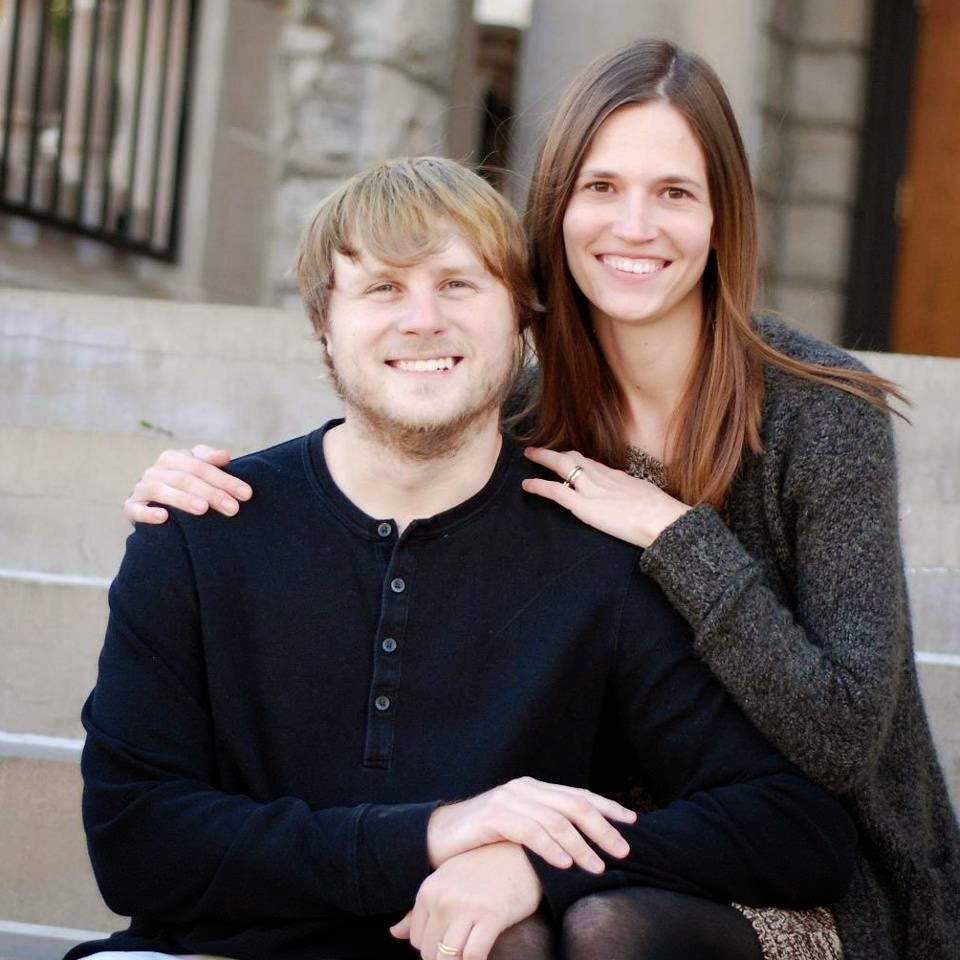 Want to sew something? Here are a few places to check out: 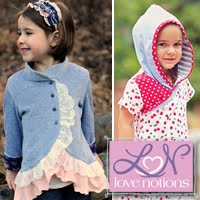 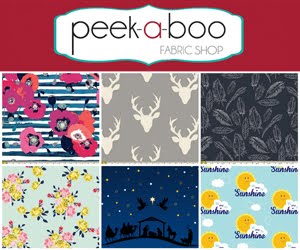 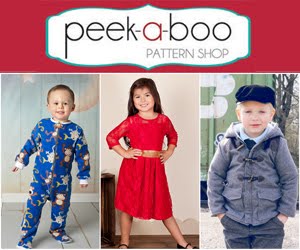